The following excperpt is from an article found on RevCycleIntelligence.com. It was written by Jacqueline DiChiara. 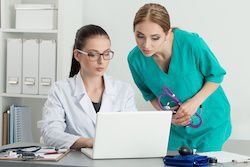 Healthcare organizations are focused on strengthening revenue cycle management processes in a post-ICD-10 environment, according to Porter Research and Navicure’s national ICD-10-centered survey.

Retaining productivity levels post-October 1 was a key focus as last year came to a close.

"Keep calm on code on!" – one of many popular revenue cycle mantras that seemed to stick. Perhaps it still does.

Ninety-nine percent of healthcare organizations considered themselves ready for the ICD-10 implementation switchover on October 1, 2015, Porter Research and Navicure claimed.

On the flipside, 13 percent of the practice administrators, billing managers, practice executives, and billers and coders surveyed – most working at organizations with between 1 and 10 providers – reportedly observed a recent drop in productivity.

According to the fifth survey's key findings, claims denial rates are primarily in the clear. Value-based care initiatives reportedly remain a top focus for healthcare organizations for the remainder of the year.