ONC: Health IT Adoption, Use Has Improved Patient Safety

The follow excerpt is from an article on iHealthBeat. 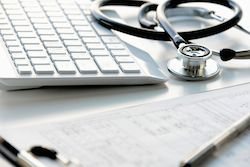 The increased adoption of electronic health records and other health IT has improved patient safety, according to an issue brief by the Office of the National Coordinator for Health IT, Health IT Analytics reports.

The issue brief -- which is the first of four that ONC plans to publish by September 2015 -- examined four systematic literature reviews and various studies that show how health IT has influenced factors that affect patient safety.

In a blog post about the issue brief, ONC Chief Medical Information Officer and Office of Clinical Quality and Safety acting Director Andrew Gettinger and Senior Policy Analyst Kathy Kenyon wrote that the Institute of Medicine's "To Err is Human" patient safety report recommended "health IT as part of 'redesigned systems of care.'"

They noted that in the years following the report, studies have shown that health IT has resulted in more benefits than harm.

For example, the brief cited a series of four systematic reviews conducted between 2006 and 2014, one of which found that data-driven technologies -- such as clinical decision support, computerized provider order entry and EHRs -- were associated with: